Rule of interaction: You can touch, change, build and destroy anything, but nothing can leave or come into the “city.”

Steady-State illustrates a steady-state economy as visitors shape a miniature model city made of New York City’s waste. Within the piece, the overall number of buildings, green spaces, and other urban infrastructures stayed the same, but people rearranged, transformed, destroyed and rebuilt the cityscape into their idea of what a city should look like. 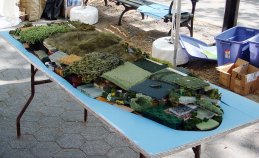 IDEAS City: The City began as a grassy mound 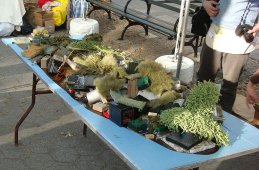 IDEAS City: It was slowly uncovered

IDEAS City: And the City began to get taller as the grassy areas were pushed further north

IDEAS City: The initial chaos of the northern part of the city

IDEAS City: The cars are relegated to a car museum

IDEAS City: Towards the end of the day 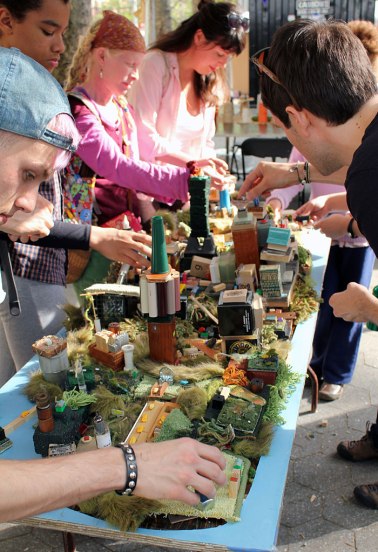 IDEAS City: Towards to the end of the day 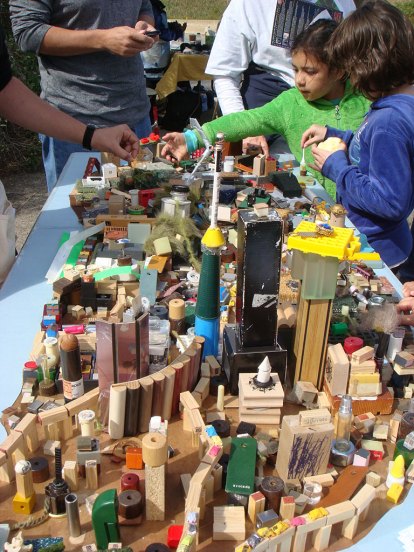 Freshkills: The City is much more orderly 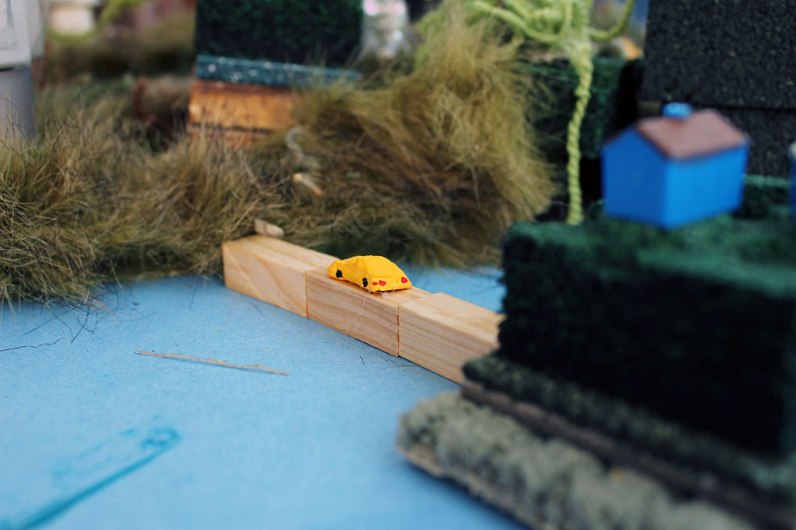 Freshkills: A car travelling to an island

The piece started as a grassy mound. The first visitors had to dig and cut into the “grass” to find the table to build on. But here were so many items on the table that participants could not clear an open space, start from scratch, or build a grid. Every time they tried, they came up with “waste” that they had to build with because they couldn’t dump the debris on State Island or ship it to Connecticut.

A pile of discarded bits began to build up in Harlem. It got so high we called it Mount Harlem. Some New York City landmarks began to grown downtown and the tidy grid tried to assert itself. One participant wanted to see if a city could rebuild after total devastation, like Japan or Haiti after natural disasters or Warsaw after WWII. So they destroyed the city and began to build from the chaos (everyone had fun being Godzilla). An urban planning student came by and said the city looked like Latin America, where you build on top of and around everything that’s already there– you don’t clear a grid. She stayed and started building a jungle that stretched north from 59th street, with vines and cars traversing over swamps on bridges. Below 59th street the grid tried to reassert itself again and sky scrapers developed with debris all around them. A woman came by and decreed that there would be no phallic buildings in the New City. After she built it looked like half of the materials had gone away, but they had been turned into a city-wide distributed infrastructure. After time, people started stacking skyscrapers again until the wind came and knocked them over. We had to learn to build wind-proof houses. Finally, a crew of eight-year-old architects came and competed for the highest skylines. Finally, they put all the green on top and called it finished.

A steady-state economy, a term coined by economic ecologist Herman Daly, establishes a sustainable scale that does not exceed ecological limits. Development means that things change, move, fall over, improve, and evolve, but they do not grow.