There are two rules of interaction for the piece:
1. You can touch, move, and rebuild any part of the model city. Take a photograph of what you’ve created and upload to trashtransformation.tumblr.com so we can watch the evolution of the model over time.

2. You can take anything away from the model if you replace it with something beneficial to the city. Take a photograph of what you’ve left behind and upload to trashtransformation.tumblr.com

In every other installation that used waste to model an economy through simple rules of interaction, the fact that pieces were made of trash was the least interesting aspect of the participation. People seem nonplussed, and carried on as if the art was made of any other material. Trash Transformation is the only installation in six years of making art from waste where the public treated the art like trash. About a quarter of the art was destroyed by being stepped on. Though the piece was eventually installed so that all objects were coordinated in a single “city,” the next day the objects were far flung and disorder. Also unique to Trash Transformation is that people did not always followed the rules. People took things without leaving things behind, and people did not always take photographs. When people did leave something behind, they often reached into their pockets for their part of the exchange, trading art for trash. The rules said to exchange art for something that would benefit the city, but this happened rarely according to the photographs submitted. In most photographed cases, when people made forays into organizing the mess into some sort of urban plan, they did so on a small, individual scale. This isn’t to say that every participant wantonly destroyed or abused the art, but that the overall gestalt was unlike any other collection of behaviors portrayed in every other installation of the same kind.

What accounts for this difference, given that the rules of interaction are nearly identical to other installations? Some of the photos that were taken are below, along with efforts to turn the tide of trashing the exhibit that proved generally unsuccessful. Trash Transformation is the only installation of Liboiron’s body of work within an exhibit about trash. Perhaps the frame of waste overrode the usual variety of interactions participants have used in other works, and introduced new, trashy, ones.

All participant-submitted images, in order of submission, can be found here.

The installation prepared by the artist, before shipping the piece to High Trash at the Fleming. 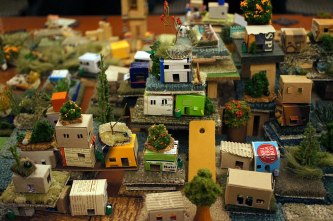 Detail of the installation prepared by the artist, before shipping the piece to High Trash at the Fleming. 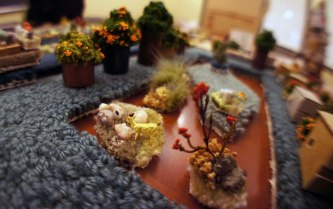 Detail of the installation prepared by the artist, before shipping the piece to High Trash at the Fleming.

The installation at the Fleming. Image by participant.

Many pieces were damaged. 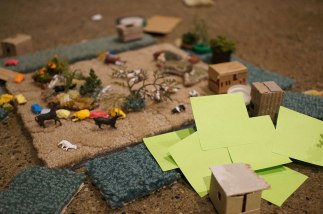 The rules said to exchange art for something that would benifit the city. Unlike other rule-based economy installations, things were left behind that were simply trash. 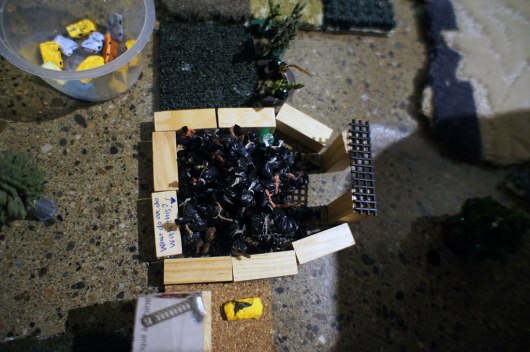 After the artist talk, Liboiron and Vermony University students complety rearranged the installation, aiming to forstall “broken window syndrom” so people would treat the installation better in the future.

The results of the collective intervention into stopping “broken window syndrome” 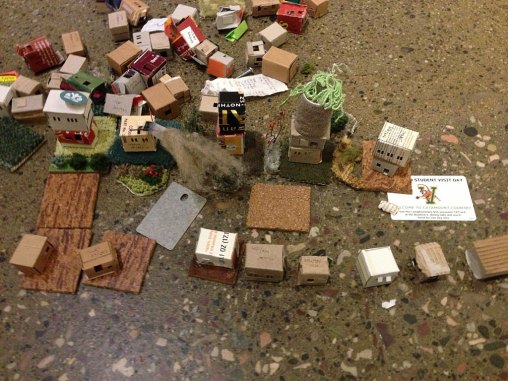 The next day, the installation was in ruins.Image by participant.

Many organizing and building efforts were small oaises in a larger chaos. Image by participant.